I’m a big fan of research—I read through about a dozen reports on fintech and crypto per week. Silicon Valley Bank’s State of Fintech report is a must read: SVB has a unique purview over the technology ecosystem in general, considering how integral it is to venture funds and startups alike.

You can take a look at the report here—just plug in some info and you’ll get access to the full report. I picked out some of my favorite data points and charts for you all, in case you don’t have the time this holiday weekend to do a deep dive into it.

Overall, it paints a dim future for the next year or two in fintech—revenues are not just slowing down, but going negative; not nearly as many companies have even 12 months of runway than I’d expect, and firms are trying to find new ways to cut expenses. And, to make matters worse, valuations are getting cut dramatically and IPO’s and exits seem far away as well.

As companies spend a ton on marketing for events like Money 2020, I think we’ll see more of a pull back around that cost, and payroll too. We’ll also end up seeing some tough decisions around whether companies should raise a big down round or sell at a discount—if they’re not getting acquisition offers with terms they’re exited about, and VC’s are discounting companies aggressively, a lot of firms will be between a rock and a hard place.

Buckle up—the rocketship days of fintech are over, and things are coming back to reality.

This is a great chart comparing fintech companies and corresponding regulation—it’s not perfect but it gets the point across. Considering how many dollars and venture capital interest there is in fintech, it’s still a very murky when it comes to regulation. According to a recent survey by KYC provider Alloy, 47% of fintech companies surveyed said their number 1 concern right now is the regulatory climate.

Yikes. Big yikes, even. VC investments into the fintech space have dramatically fallen over the last year—from $56 billion to a projected $38 billion. Right now it sits at $28 billion, which is half of what 2021’s total count was, and only a few billion more than 2020.

Obviously 2021 was an anomaly year in fintech, but the interesting thing to note is that we’re still seeing a lot of deals, they’re just not as big as they were. 2022 is projected to have just over 2000 deals, close to 2021’s number of 2125 deals.

Another thing that’s fallen off? Valuations.

Based on SVB’s data, the hardest hit round has been the Series B, followed by Series A rounds. This is something I’ve been talking about for quite some time—that the earlyish and mid rounds, like a company’s Series A & B, will be significantly weaker than earlier rounds. It looks like there’s now even more data behind my theory.

Based on projections it looks like the hardest hit sectors are going to be…consumer insuretech, consumer payments, and alternative commercial lending. In an unsexy sector like fintech, these are arguably the unsexiest. They haven’t seen huge exits and haven’t seen as much hype either.

Also, in my opinion, these are sectors that are still ripe for innovation; its just no one’s focusing on them as much. I think there’s still a lot of untapped ways to move money between consumers, underwrite businesses for commercial loans, and offer insurance products to the average person. If I were building a company, these would be areas I’d explore a bit.

Scary hours. That implies that a LOT of fintech companies will be going out to fundraise over the next year, and we’ll see even more flat and down rounds than we’ve been seeing already. 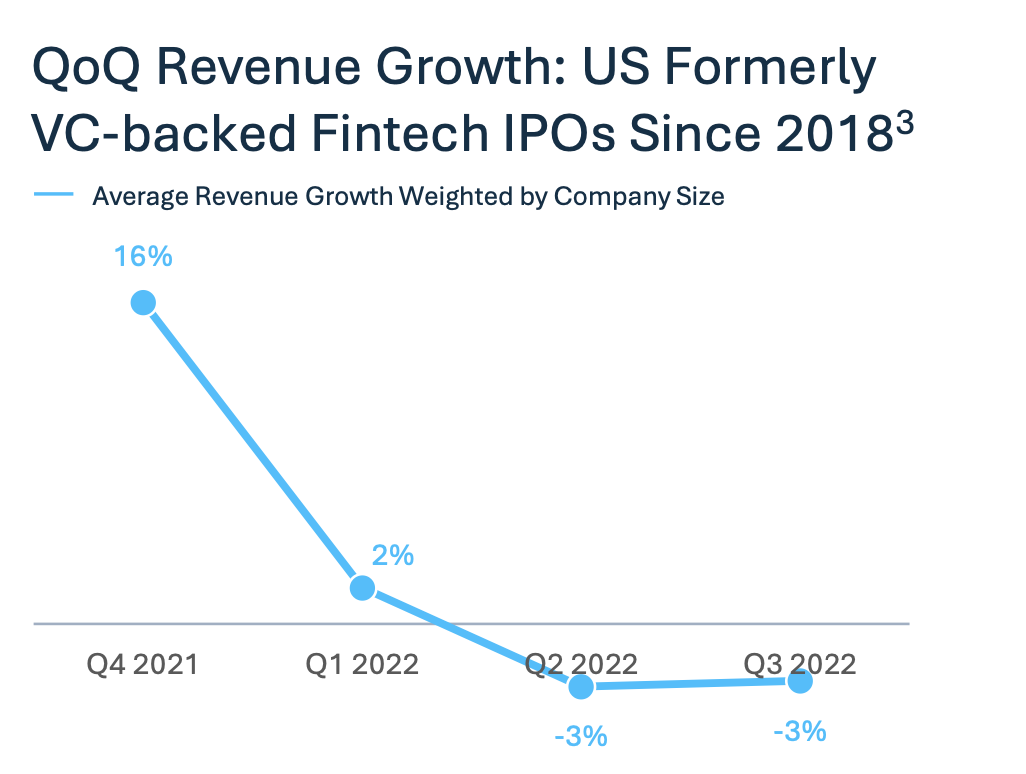 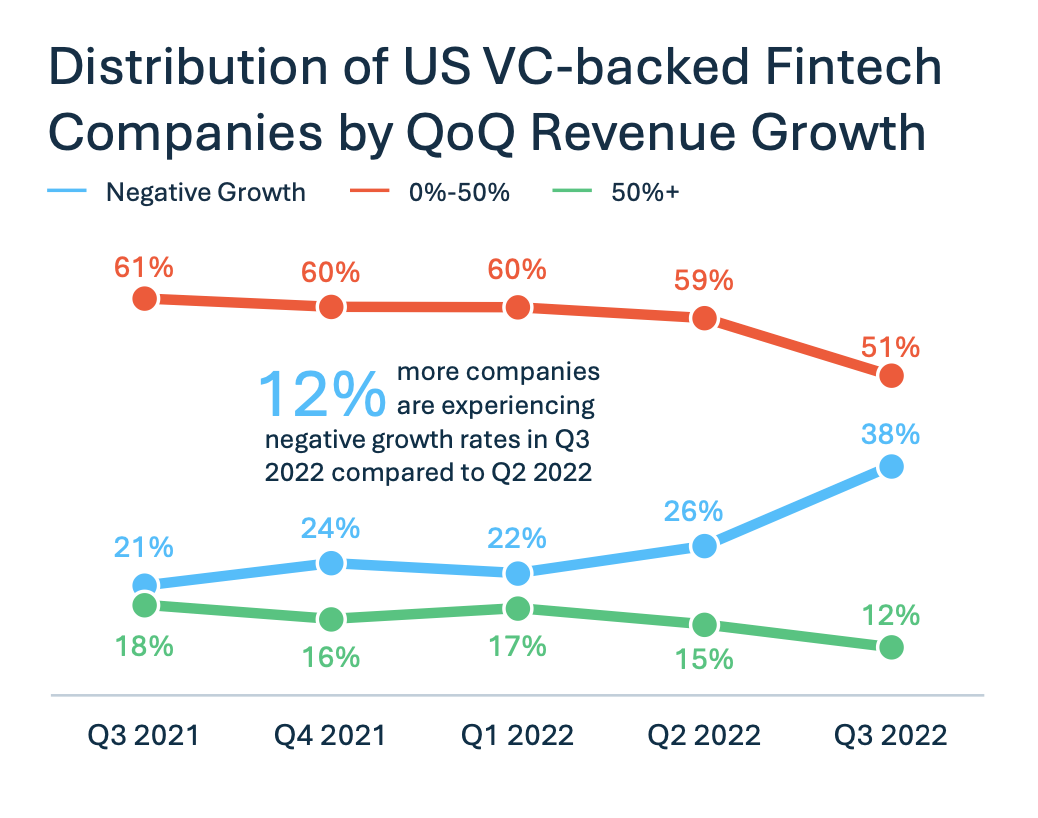 This was like the second most alarming stat in the report. I did expect revenue growth to slow down—I didn’t expect it to go negative. I especially didn’t expect that it’s been negative for 2 quarters, as the first chart says.

So, in fintech, revenue growth is slowing down or going negative and companies don’t have enough runway to last the year. But, it looks like companies are cutting expenses fast enough to keep pace.

Only in the last quarter did companies really start cutting burn, going from 40ish% to over 60%, reaching the same highs as during the pandemic. But still, that figure only accounts for companies cutting less than 25% of their burn; slightly more than 20% of companies are cutting expenses over 25%. In fact, between Q1 and Q2, the number of companies shedding more than 25% of expenses actually fell.

If these trends stay the same, and there’s no reason to think they won’t, then expect a wayyyy bigger pullback on expenses over the next few months.

After seeing a small boom in IPO’s, fintech IPO’s are back to the average; there hasn’t been an IPO for a VC backed US fintech company in 324 days, according to SVB. While there are a lot of SPAC’s out there according to SVB, I don’t expect those deals to be great exits for companies.

A marker for this is the secondary market—as you can see, 51% of secondary sales in fintech are being sold at a discount this year, which implies that either investors or employees (or both) don’t have much faith in the valuations in the companies they have equity in.

Fintech has oscilated between consumer and enterprise—over the last few years, we’ve seen enterprise venture capital dollars significantly outpace consumer. Yet, according to the SVB report, revenue growth between the two are roughly the same? And since about Q4 2021, consumer fintech revenue growth has actually outpaced enterprise? Super interesting since over the last few years, the hottest (and most valued) deals in fintech have largely been on the enterprise side.

Last but certainly not least, where companies are pulling back their expenses matters. We’ve seen a lot of layoffs, but payroll only accounts for slightly over 40% of expense cuts. Companies are cutting back way more on marketing and computing costs.

And while we’ve seen a lot of layoffs in fintech, its clear that companies are still spending a bit too much and are still overbloated. As I mentioned before, if companies seeing slow or negative revenue growth, and bleeding runway dollars, then expect more layoffs in fintech too. You can only cut marketing so much—eventually, you’ll need to reduce headcount too.