Understanding online identity has never been more important. As of 2022, nearly five billion people globally used the internet, and that number is growing ~6% every year. The average internet user spends nearly seven hours a day online. As more of our everyday interactions are lived online, a host of potential problems arise. Fraud, legal compliance, money laundering, and user safety are just a few of the problems on the rise alongside internet usage. Reported instances of identity theft grew 5x between 2017 and 2021.

Persona is tackling the identity verification market horizontally through a flexible and customizable solution for its customers. Persona has a wide variety of customers and that user base creates a network effect where, over time, users could verify their identities once on Persona and then easily reverify their identities with all of Persona’s customers (like Coursera, Square, and Postmates). Users would avoid having to follow a separate, tedious login process for each company, providing a significantly improved Internet

Charles Yeh and Rick Song previously ran the identity teams at Dropbox and Square, respectively. They knew how difficult it was to manage user identity and spent significant efforts internally building their own tooling. They realized that every business managing users online would need similar solutions, leading them to found Persona in 2018.

Persona’s core product is a fully-automated identity verification service using machine learning, computer vision, and algorithmic checks, each of which only require seconds to complete. Persona’s launch of workflow engine allows customers to pick and choose where in their user’s journey they want to introduce points of verification to minimize risk without introducing significant friction.

That vision has extended from managing a variety of different kinds of identity verification (government ID, social security, bank accounts) to ongoing verifications and reports.

The core of Persona’s product is an identity verification engine. Persona can verify a number of different documents including government IDs, biometrics, or Social Security Numbers. The process is fully automated, where “most decisions take just 5 seconds” compared to legacy solutions that can take several minutes. Customers verify that users are real people and are who they say they are. Persona also offers validation of government IDs from over 200 countries and supports 20 languages.

Persona increased the functionality of its verification module by allowing customers to design their customer onboarding process. Customers can select which types of information to collect from its users and determine how strict they will be across different risk segments. Persona has also enabled customers to white-label its product. For example, when you buy alcohol on Postmates, you are going through a Postmates user experience that is being powered by Persona. 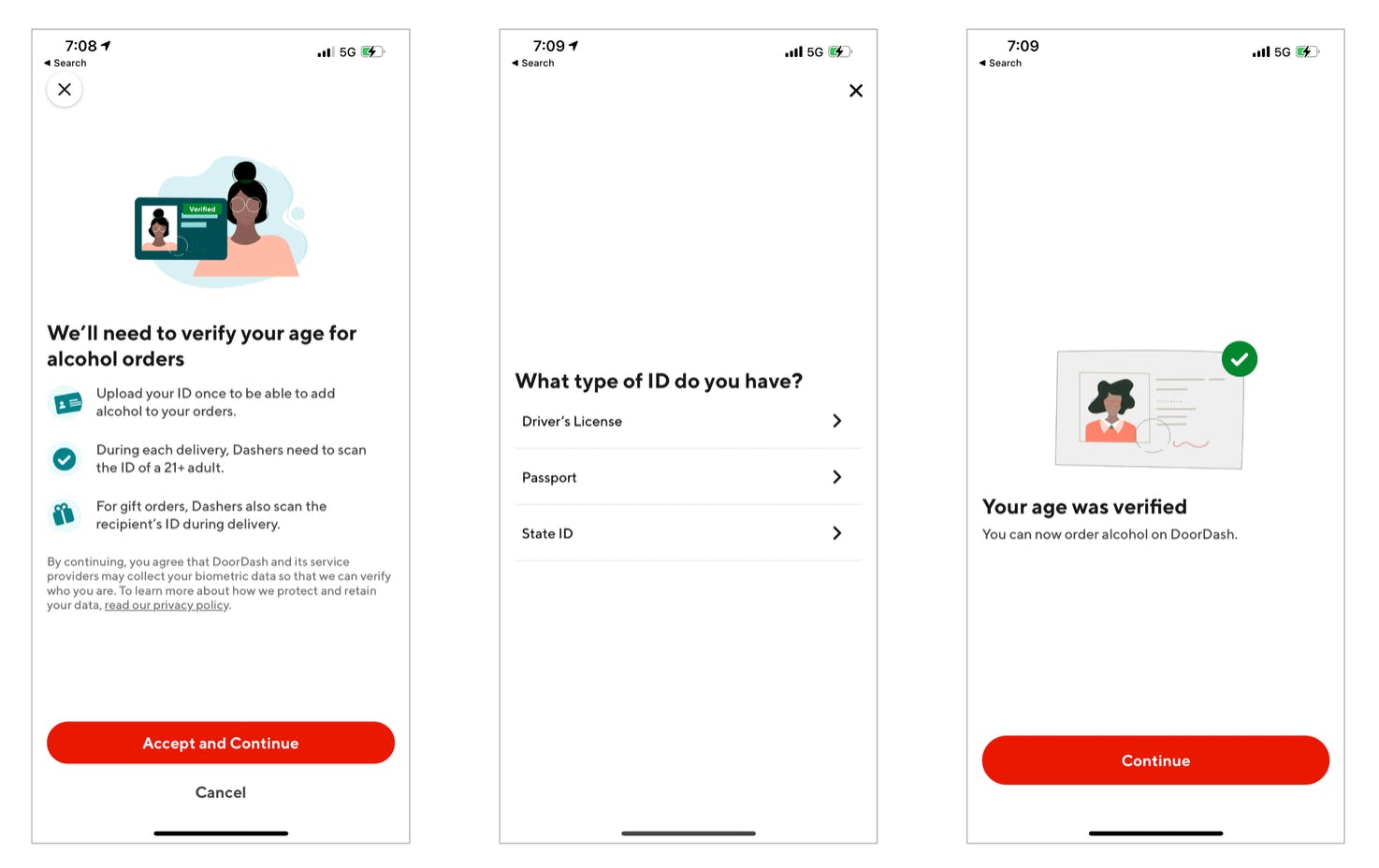 Depending on the results of the check, customers can dynamically request different levels of information. Suppose a financial platform does a credit check on a potential loan recipient and finds their credit score is below a certain threshold. The platform could then request additional income information to increase their visibility on that user or reject the user as the result of unacceptable levels of risk. 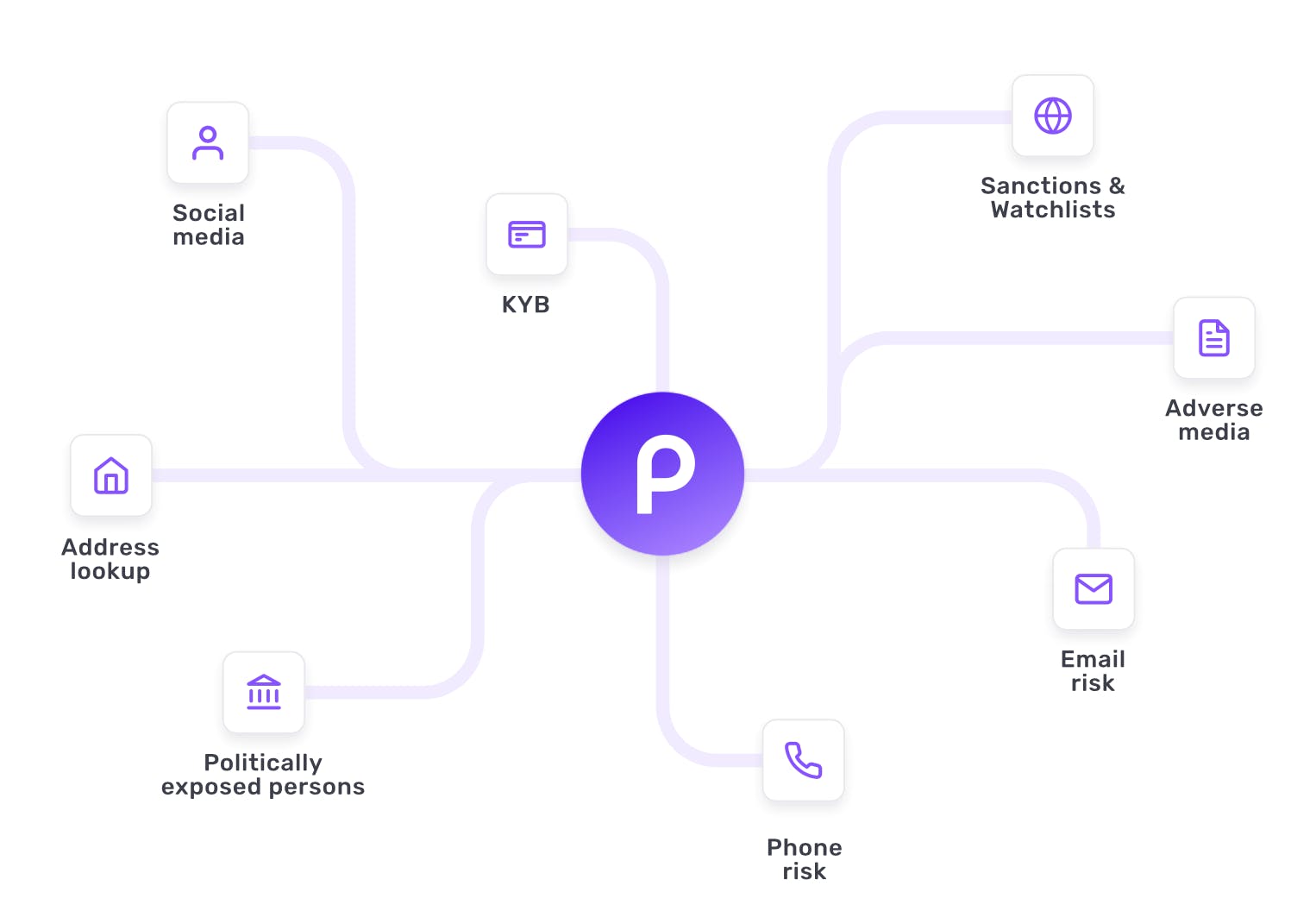 Imagine a product like Square Capital. They provide loans to over 100,000 merchants. Each of those loans requires Square to collect a variety of data, some of it being personal identifiable information (PII) which has to be managed within very strict parameters. Customers like Square also have to manage the threat of potential fraud in their program. Persona built beyond its initial verification product to enable customers to build on-going reports around its users. These reports can pull in data from “global watchlists, adverse media, and email or phone risk reports.”

When Persona’s customers manage their user bases, they often keep an out for suspicious activity or increased potential risks. As potential issues arise, Persona enables customers to manage cases, like open tickets, where they can conduct investigations into their user’s behavior and figure out if something needs to be adjusted. The product aggregates all relevant information to avoid the need for reviewers to context-switch. Custom templates can also be made for specific types of cases. 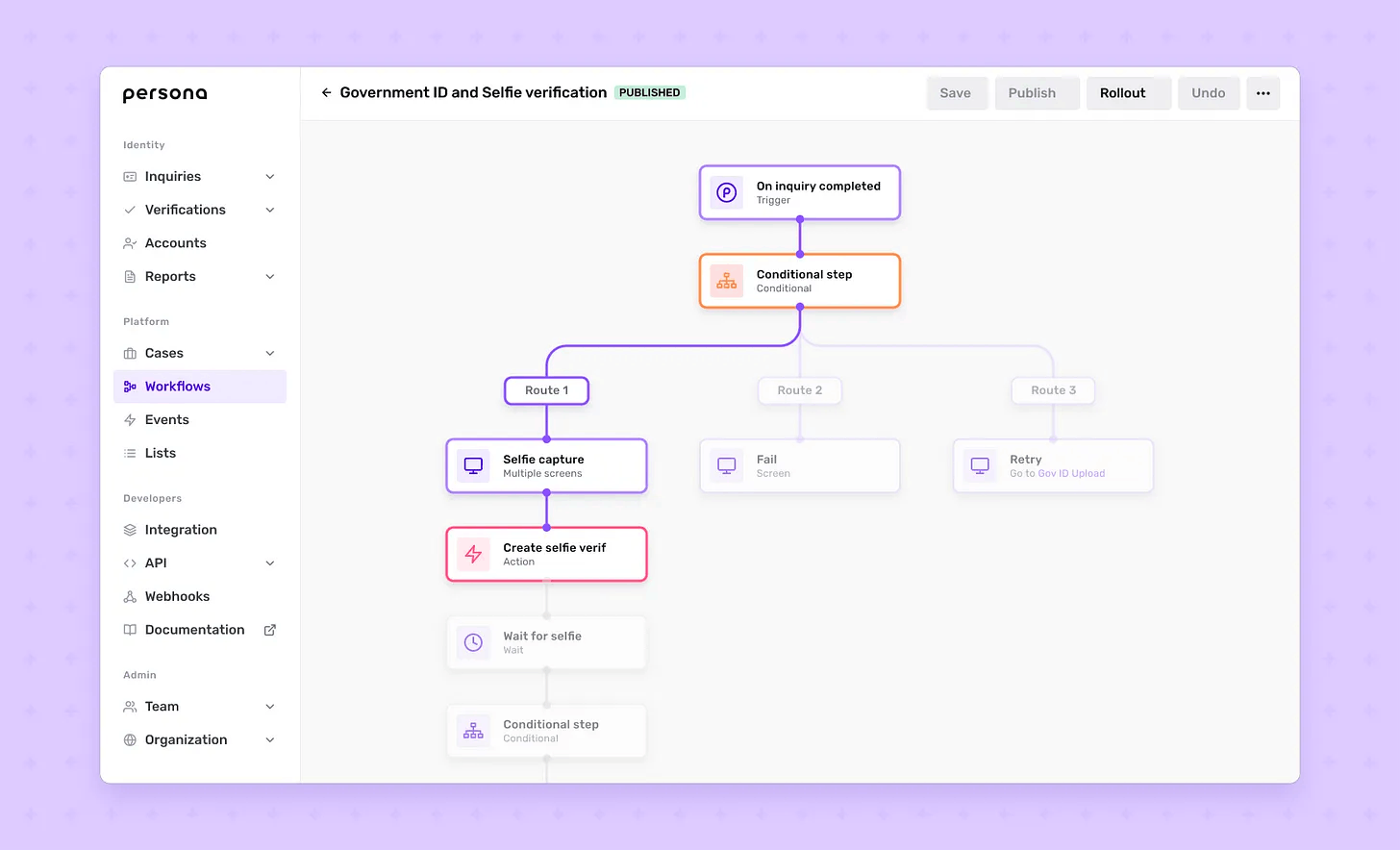 Customers can create automated, customized identity-related workflows. An API trigger, or an event such as verification completion, can initiate the process of Persona pulling in additional data (such as watchlist report), segmenting users with custom logic, and triggering follow-up actions like resolving a support ticket or opening a case. The workflow tool is a simple drag-and-drop interface that makes it easier for non-technical users to manage a process. The platform allows more customized code to re-write certain phases of a given workflow if the customer wants to, for example, manipulate data as part of that workflow.

Persona primarily serves customers with large and growing user bases, often those that touch a financial transaction or engagement requiring high trust. From verifying rentersbefore giving them the key to making sure delivery drivers are who they say they are, Persona can address many use cases. In particular, customers with on-going financial relationships (like lenders) or repeat users (like rental marketplaces) benefit from being able to track a user over time and run re-verifications.

Brex is a fintech platform that, in order to comply with KYC/AML regulations and prevent fraud, has to frequently reverify their users. Previously, Brex checked users’ identities manually and required users to enter information across multiple accounts. Persona allows them to automatically verify government IDs from around the world.

MyRent, an online rental marketplace, uses Persona to prevent fraud and build trust and safety. Users can rent everyday items including photography equipment, bicycles, and video game consoles. Identity verification by Persona allows MyRent to avoid fraudulent rentals and provide a Lender Protection Guarantee for a lender’s products up to $1,000.

The identity verification market is projected to grow from $8 billion in 2021 to over $17 billion in 2026. Some key tailwinds for identity verification include continued internet penetration and increasing emphasis on data privacy. Not only has the number of internet users continued to increase, but the number of applications has exploded moving more of every user’s life online.

Beyond simply having more users to verify, there is a growing demand for consumer applications to more effectively manage data privacy. In 2021 data breaches increased 23% more than the previous annual record. Companies are looking to handle less of their user’s sensitive information and reduce their security liability. The EU’s General Data Protection Regulation (GDPR) imposes fines as high as 4% of a company’s global yearly revenue for data breeches.

As Persona extends beyond data verification and into the broader identity management world, they also expand its addressable market. Managing consumer identity broadly is expected to grow to a $30 billion market by 2030. Rick Song, the CEO of Persona, describes its broader vision this way:

“Identity isn’t a single point in time, or one-size-fits-all, or transactional; identity is dynamic and contextual. Identity is a relationship.”

The more effectively Persona can manage that relationship between applications and users, the more Persona becomes a critical piece of infrastructure.

Persona faces competition from a number of different players given its focus not only on identity verification, but the broader identity management stack.

Socure, Jumio, and Onfido compete directly with Persona. Socure is the largest of these, having been valued at $4.5 billion in 2021 and with prominent customers like Chime, DraftKings, and Public. In contrast with competitors like Onfido who combine manual and automated review, Persona’s offering is fully automated, providing the potential for greater accuracy but requiring slower review times and greater costs as a trade-off.

Alloy and Unit21 are two companies acting as intermediaries to allow customers to access a variety of identity service providers like Equifax and Experian (credit data), ComplyAdvantage (watchlist screening), and Onfido (identity document verification). While Onfido’s identity verification product competes with Persona’s verification module, Onfido is just one of many inputs for Alloy’s workflow tool. Persona’s own workflow tool also puts them in competition with Alloy in a way that Onfido does not.

Large tech companies, such as Google, Meta, and Apple, already offer the ability to sign in with a single account on multiple platforms. They have the advantage of already having extensive user bases. For instance, Gmail had over 1.8 billion active users globally as of January 2020. While these platforms manage casual account login they’re not directly competing in managing underlying identity data like drivers licenses.

All three of these large companies and many others are members of the FIDO Alliance, whose mission is “to reduce the world’s reliance on passwords to better secure the web”. The FIDO Alliance defines standards for passwordless logins, and Apple will be releasing its implementation of them with Passkeys in iOS 16 and macOS Ventura. Efforts like these indicate the interest large tech companies in managing user login flows, but they have a ways to go before they’re competing head-to-head with Persona.

Persona employs usage-based pricing, charging customers a fee per successful verification regardless of the plan they choose. The Starter plan is free with limited features and customizability. The Growth plan offers a full feature set and more customizability. The Enterprise plan allows for management of multiple organizations, custom development, and custom integrations from the Persona team.

Some estimates indicate Persona has over 500 customers in 2021 and generated north of $20 million in revenue. Persona serves a variety of high-profile customers, demonstrating the success of Persona’s horizontal strategy across finance (Brex), healthcare (SimpleHealth), education (Udemy), and HR (Rippling).

The “AWS” of Identity

With their ease-of-use and customizability, Persona wants to provide the building blocks of every company’s digital identity stack. Rick Song, the CEO of Persona, compares those building blocks to what AWS did for compute infrastructure:

“When AWS came along, companies no longer had to think about their web infrastructure or network. In the same vein, we want to provide the identity infrastructure businesses need so they don’t have to build it themselves, piece together multiple services, store customer data, or worry about bad actors or fraud. Instead, they can focus on other aspects of their business. Founders build companies because they want to fix a larger problem — not because they love thinking about infrastructure.”

While identity verification is a complex problem to solve, it’s one aspect of the entire identity management lifecycle. Persona is strategically positioned because they are already housing verified user data. Their vision extends to managing sensitive user data and becoming a more critical part of companies’ identity infrastructure.

Customers can switch identity verification providers without tremendous difficulty. The co-founder of one existing Persona customer, MyRent, described how such a switch would face three surmountable barriers: (1) Continuing support of Persona until existing users upgrade to the latest version of the app, (2) Exporting data from Persona and mapping it into the format used by the new vendor, and (3) Integrating the new vendor within the app

MyRent’s co-founder estimates the transition would require ~3 months of engineering time, with one month for a backend engineer and one month each for an Android and iOS engineer. In addition, waiting for existing users to upgrade would take approximately 6-9 months, during which time the company would have to pay both Persona and the new vendor.

Persona’s vision of becoming more critical in the identity stack, and expanding to manage user data, would increase the switching costs for their customers.

Blockchain technology users grew by 178% in 2021 to nearly 300 million. When using decentralized cryptocurrency exchanges (DEXs), users “don’t have to create an account or verify your identity” because they already have their identity verified on the blockchain with each wallet address as a unique on-chain identity. As a result identity becomes built in and solutions like Persona could become less relevant.

Persona raised a $150 million Series C at a $1.5 billion post-money valuation in September 2021 led by Founders Fund. Other investors of the Series C round include Index Ventures (who previously led their Series B earlier in 2021) and Coatue Management (who led their Series A in early 2020).